Well done to Greenpeace activists who climbed the side of Prirazlomnaya, a floating oil platform in Russia’s Pechora Sea, on Friday to protest about oil drilling in the Arctic.

The six activists, who included Greenpeace executive director Kumi Naidoo, spent several hours hanging off the side of the giant oil platform, interrupting its operations. 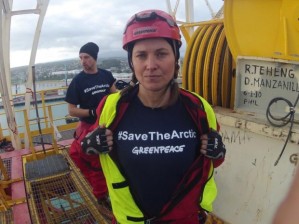 A report by Greenpeace and World Wildlife Fund, issued last week, said that a spill from the oil platform could contaminate protected areas and nature reserves on the shore and islands within 20 hours, while emergency teams would take at least three days to reach the area.

6 responses to “Don’t kill the Arctic!”