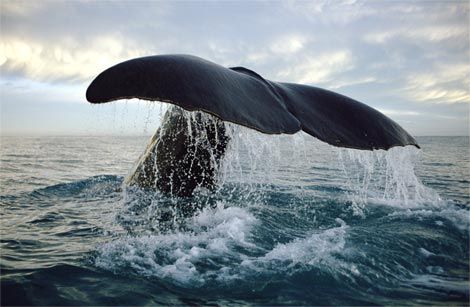 There was some sad news today when it was reported that a dead sperm whale washed up on the southern Spanish coast had swallowed 17kg of plastic waste dumped into the sea by farmers tending greenhouses that produce vegetables for British supermarkets.

The 4.5 tonne whale had swallowed 59 different bits of plastic – most of it thick transparent sheeting used to build greenhouses in southern Almeria and Granada, reported The Guardian. The plastic had eventually blocked the animal’s stomach and killed it, according to researchers from Doñana national park research centre in Andalusia.

In all the whale’s stomach contained two dozen pieces of transparent plastic, some plastic bags, nine metres of rope, two stretches of hosepipe, two small flower pots and a plastic spray canister. All were typical of the Almeria greenhouses where plants are grown in beds of perlite stones and drip-fed chemical fertilisers.  Tesco, Waitrose and Sainsbury’s are all valued customers.

Environmentalists complain that local riverbeds are often awash with plastic detritus and  some ends up in the sea. “The problem of degraded plastics that are no longer recyclable still remains,” said Renaud de Stephanis, lead researcher at Doñana. “These animals feed in waters near an area completely flooded by the greenhouse industry, making them vulnerable to its waste products if adequate treatment of this industry’s debris is not in place.”

The news came just two days after British actor Jeremy Irons told a conference that people must overhaul their habits of “unadulterated consumerism” if the EU is to curb its huge waste problem.

The European Commission hosted the conference in Brussels  to announce the publication  of the EU’s green paper on plastic waste. It aims to launch discussions about how to make plastic products more sustainable throughout their life cycle and reduce the impact of plastic discards on the environment.

“We have time for things we think are important,” said Irons. “If people were made aware of the follow on [of waste disposal]… Unadulterated consumerism will not work. Now it is really time to think. The old model, especially in this part of the world, hasn’t worked well.”