More than half of people in the UK see frogs in their gardens but only a fraction ever see a red squirrel, according to the world’s biggest wildlife survey.

This year, Big Garden Birdwatch participants were asked to tell the RSPB about some of the other wildlife that visits their gardens throughout the year, including common frogs, red and grey squirrels, badgers and hedgehogs.

The RSPB hopes to use it to build an overall picture of how important our gardens are for all types of wildlife and tailor its advice so people can help their wild visitors find a home, feed and breed successfully.

Mammals
According to the results, grey squirrels came out on top overall, with 72% of people seeing them in their gardens at least once a month. At the other end of the scale, the red squirrel, was the least-seen garden visitor, with just 3% of people reporting seeing them on a monthly basis.

The red squirrel, which is threatened by a lethal virus carried by the grey, has been lost from much of the UK. In areas where the greys don’t carry the virus, the reds are still affected, essentially being out-competed by their rivals.

However, in rural Scotland, where the red still has a stronghold almost 1 in 5 people see them in their gardens at least monthly. Although still quite widespread and seen in 67% of the UK’s gardens at least once, hedgehogs were only seen regularly in less than a third of gardens and their populations have seriously declined by around 30% since the millennium.

Badgers are spotted more regularly by people living in rural areas, with 40% reporting to have seen one. However, the black and white mammal isn’t exclusive to the countryside, with 20% of suburban and 15% of urban residents seeing them in their gardens too. Deer are also much more common in the countryside, with around 30% of rural residents seeing roe or muntjac deer in their garden at some point, compared with only 5% of urban dwellers.

Amphibians
When not hibernating, the common frog takes the lead as the most abundant garden amphibian, according to the results. Approximately half of people in the UK see a common frog in their gardens at least monthly, regardless of whether they live in a rural, suburban or urban area.

When it comes to toads, 28% of people see them monthly. The warty amphibians, which have declined especially in central and southern England, are more likely to visit gardens in rural areas, with 41% of householders in these areas seeing them on a monthly basis.

Marina Pacheco, the Mammal Society’s Chief Executive, said: “It’s fantastic to know that gardens can be a vital refuge for rapidly declining species like the red squirrel and hedgehog. As well as taking part in an enjoyable survey, participants have greatly increased our understanding of the distribution and relative abundance of UK mammals.”

Almost half a million people took part in this year’s RSPB Big Garden Birdwatch and discovered some interesting changes among our most popular garden birds, with some species creeping up the rankings.

It’s all change in the top 10, with blue tits in their highest position since the Big Garden Birdwatch began, at number two. The previous occupiers of the second spot, blackbirds, have dropped to number four.

Goldfinches have climbed another place since last year, and now perch at number seven. The robin, which has been as high as number seven in the past 10 years, has dropped back to number 10. And for the first time ever, the great spotted woodpecker has squeezed in at number 20.

Scientists believe that the weather has played a role in the ups and downs in this year’s top 10, as many of the birds were recorded in lower numbers in gardens due to the mild conditions.

Some species, such as blue tits, were likely to be more reliant on food provided in gardens than others, such as blackbirds, which could easily find their favoured foods like worms and insects in the countryside.

Just 10 years ago, goldfinches were in 14th position, but scientists believe that the increase in people providing food like nyjer seed and sunflower hearts in gardens, may have contributed to their steady rise to number seven.

Overall, numbers of species such as blackbirds, fieldfares and redwings may appear to have dropped in our gardens since last year. But in many cases this is not because these populations are in decline, but because these species don’t need to come into our gardens during mild winters due to there being plenty of natural food available in the wider countryside.

However the continuing declines of some species are of greater concern. Numbers of starlings and song thrushes have dropped by an alarming 84 and 81 per cent respectively since the Birdwatch began in 1979.

There is slightly better news for the house sparrow, as the declines appear to have slowed, and it remains the most commonly-seen bird in our gardens. However, it remains on the red list as we have still lost 62 per cent since 1979.

“They were out and about in the wider countryside finding natural food instead of taking up our hospitality. The good news is that this may mean we have more birds in our gardens in the coming months because more survived the mild winter.”

Spring is here, so why not plant some of these flowers and herbs in your garden to help sustain our declining bee population. 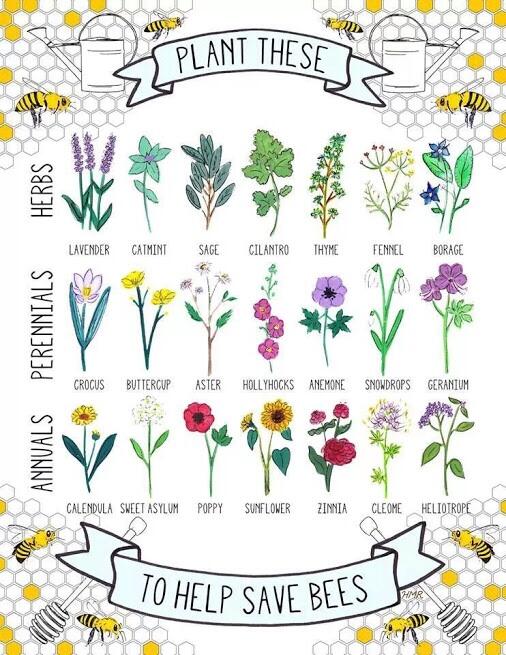 There was good news this month when the European Parliament passed a resolution supporting the creation of an Arctic Sanctuary covering the vast high Arctic around the North Pole, giving official status to an idea that has been pushed for by Green activists and campaigners for several years.

The proposed sanctuary, lying outside of Exclusive Economic Zones, would cover “one of the largest and least exploited areas on Earth: a 2.8 million square kilometer zone of the global commons,” writes Neil Hamilton, the Senior Political Advisor Polar with Greenpeace Norway. “That would be the biggest conservation zone in existence, protecting fish stocks, ice-dependent species, and a huge variety of cold water species.”

Greenpeace has been campaigning for a global Arctic Sanctuary for several years, including gathering some 5 million signatures from around the world, because there has been rising interest from governments and industries to exploit the once inaccessible wilderness for fish and fossil fuels.

The resolution notes that “climate changes in the Arctic will have a major impact on coastal regions globally, including coastal regions in the European Union, and on climate-dependent sectors in Europe such as agriculture and fisheries, energy, reindeer herding, hunting, tourism and transport.”

In addition to supporting an Arctic Sanctuary, the European Parliament’s resolution would ban fisheries in the high Arctic seas “until the establishment of appropriate regulatory mechanisms and protection.” It also calls for “strict precautionary regulatory standards” when it comes to fossil fuel exploration and extraction in the region.

Last December, Gazprom become the first energy company to begin pumping oil out of the Arctic seabed. In response to this the European Parliament expressed “strong concern regarding the rush for oil exploration and drilling in the Arctic without adequate standards being enforced”.

Japanese whaling in the Antarctic Ocean was ruled illegal by the International Court of Justice this afternoon. This is a landmark ruling which will stop hundreds of whales being killed each year in the Southern Ocean around Antarctica in the name of “research”.

Australia had asked the Court to stop Japan’s annual whaling hunting expedition, claiming their programme is not scientific but commercial, because of its large scale. Japan catches about 1,000 whales each year for what it calls scientific research.

In a statement, the court said: “The special permits granted by Japan for the killing, taking and treating of whales in connection with JARPA II are not ‘for purposes of scientific research’ pursuant to [the International Convention for the Regulation of Whaling].”

The court’s decision is considered legally binding and Japan has said in the past that it would abide by the court’s ruling. But this isn’t the end of the story. While this may stop Japan’s whaling efforts in the Southern Ocean, campaigners fear that Japan could still try and find new excuses to continue this cull under another guise.

Greenpeace is urging governments to support a huge network of marine reserves that will act as sanctuaries for the diverse, beautiful, weird and wonderful species all over the world, including places like the Antarctic, which is under threat from commercial fishing and climate change.

They are calling on politicians to create a vast network of marine reserves to protect the Antarctic and species like emperor penguins, minke whales and colossal squid.